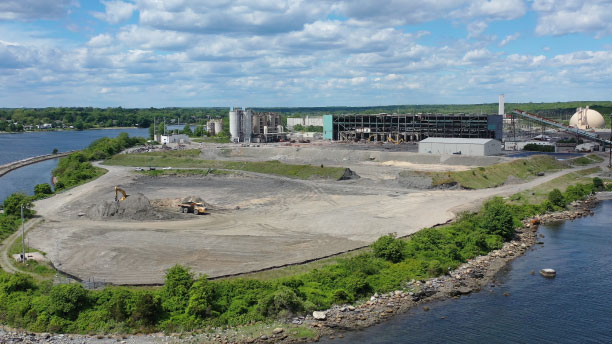 The next stage of redevelopment is site grading and began in May 2020. The grading plan will limit grades to 1.5% to accommodate offshore wind requirements for a marshalling port, manufacturing, and storage of offshore wind components.

“We are pleased to announce this large-scale demolition project was completed safely and ahead of schedule. Our crews have brought down 1.5 million sq/ft of heavy industrial space over 18 months, including large chimneys and cooling towers,” said Stephen Collins, Executive Vice President at CDC. “Our demolition program set the stage for the next phase of development”.

Redevelopment activities since January 2018 include these milestones:

About Brayton Point Commerce Center
For 50 years, Brayton Point was home to New England’s largest coal-fired power plant that generated 1600 MW of electricity to local homes and businesses and was a source of good paying jobs and tax revenue. CDC purchased the retired power plant in early 2018 and has invested significant resources to redevelop the site. Brayton Point Commerce Center will return the former power plant site to a state of productivity and growth by using the same attributes that made it successful in the past – 300 acres of industrial waterfront property, a 34-ft deep water port capable of berthing large trans-Atlantic ships, access to major highway transportation, access to a strong local talent
pool and public support for energy diversification. For these reasons, we believe Brayton Point Commerce Center will be transformed into a logistics, manufacturing and support center for offshore wind. For more information please visit www.braytonpintcommercecenter.com.